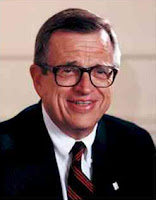 Chuck Colson (pictured above) of Prison Fellowship and BreakPoint Ministries wrote this article and I wanted you to see it. I am sad that we have a president who is so inexperienced and who's values run very counter to mine. The mainstream media is singing the praises of their new president. They campaigned hard for him and they should be proud of their accomplishment!

This article is well written and definitely something we should be aware of. Here is Colson's article:

As I noted yesterday on BreakPoint, the inauguration of America’s first African-American President was one of the most moving moments in American history.

But now that the celebrations are over, it’s time to take a close look at how President Obama is planning to govern. And the closer I look, the greater my concerns. In his first week in office, he showed shown an alarming tendency to choose pragmatism over principle.

For example, I applaud the President ordering higher ethical standards for lobbying. “If you are a lobbyist entering my administration,” Obama said, “you will not be able to work on matters you lobbied on, or in the agencies you lobbied during the previous two years.”

Unless, that is, your name is William Lynn. Obama appointed him as deputy secretary of defense—despite the fact that, until very recently, he had been a lobbyist for Raytheon, one of the nation’s biggest defense contractors, right up until the time he was appointed.

Obama used the same argument when it turned out that his choice for Treasury secretary, Tim Geithner, had neglected to pay $35,000 in self-employment taxes for a number of years. Senator Robert Byrd—a member of Obama’s own party—called Geithner’s behavior “inexcusable negligence.” He’s right.

Again, pragmatism trumped principle. Click here to read the rest of the article.